Last Thursday, on the fourth Thursday in November, Americans around the world celebrated Thanksgiving. I think for most American families, Thanksgiving is one of the biggest events of the year. Families travel from far away to gather together and spend time with one another.
In Canada, where I’m from, Thanksgiving is held on the second Monday of October (which is the same day as Sports Day here in Japan). Probably that’s because our weather is colder than in the United States. Delicious fall vegetables are harvested in early October. If we waited until the end of November, all the fields might be covered in snow!

Here at Eiwa we celebrated Thanksgiving on Saturday, November 5. In the morning, students brought a wide variety of delicious fruit to school to donate to others. That afternoon, they set off to various homes and institutions around the city, for example places that care for elderly people, and gave the fruit to them. Due to Covid19, it is still not possible to visit many institutions as freely as before, but ¬¬at one facility the brass band was able to give a performance, and at a care home for children, our students were able to play together with the kids there.

I was lucky to be able to give the morning service on that day and talk about Thanksgiving in Canada. Many people associate delicious food with the Thanksgiving holiday, so I talked a bit about traditional dishes that we often eat such as turkey, stuffing, cranberry sauce and pumpkin pie. But actually I don’t think food is the main point of Thanksgiving. For me, the key points are to say thank you to the people around you who have supported you. After all, that’s what “Thanksgiving” means – ‘giving thanks.’ The second point is to reach out to others, just like the Eiwa students did by visiting various nursing homes and the like. Thanksgiving is a time to focus on community, to see the world around you, and to try to do what you can to make it a better place for everyone. Happy Thanksgiving, one and all! 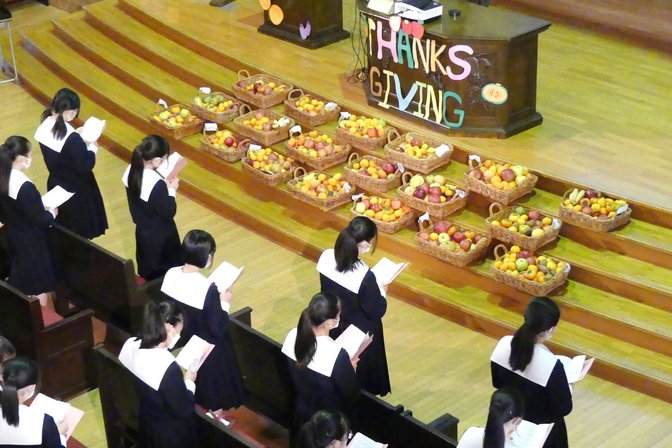